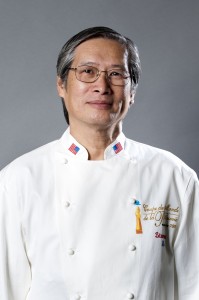 Celebrity Chef Stanton Ho will be creating some of his amazing delectable deserts once again at the Noble Chef. Ho joined Chocolates a la Carte as their Corporate Executive Chef in 2005. Previously, he was the Executive Pastry Chef for the Las Vegas Hilton. Ho oversaw their quality control and produced thousands of desserts for their 3,200 room property. Over the course of his 36 year career, Ho has won many gold, silver, bronze and special recognition awards in many national and international culinary competitions. Three of his awards were won in the International Chocolate for Jean-Marie Sibenaler Trophy Competition in Paris, France in 1990.

In 2000, he received the recognition of “Pastry Chef of the Millennium” for his mentoring, contribution, and dedication to the pastry industry. In 1999, Ho became the President of United States World Cup Pastry Team, winning America’s first Gold Medal Championship at Coupe du Monde de la Patisserie in 2001 in Lyon, France. He is a graduate and a Distinguished Alumni of the University of Hawaii and Ecole Le Notre in Plaisir, France.