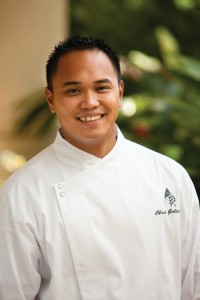 Christopher Galicinao trained at the Art Institute of Seattle, School of Culinary Arts. He began at the World Trade Center Seattle and the Bell Harbor International Conference Center as a lead line cook. Chris later moved on to The Golf Club at Newcastle where he was soon promoted to Sous Chef and then Banquet Chef for their restaurant “The Calcutta Grill”.

After the birth of his second daughter, Chris decided to move his family back home to Maui. He joined the team at Pacific’O Restaurant where he worked under Chef James McDonald as Restaurant Chef.

Chris came on board as part of the opening team at “Duo Steak & Seafood” located at The Four Seasons Resort Maui at Wailea. Soon thereafter, Chris was promoted to Garde Manger Chef and then became their Chef de Cuisine.

Chris has connected with his local farmers and purveyors and he strives to use as many local ingredients as possible. Chef Galicinao strives to showcase the natural beauty of his ingredients in his dishes.